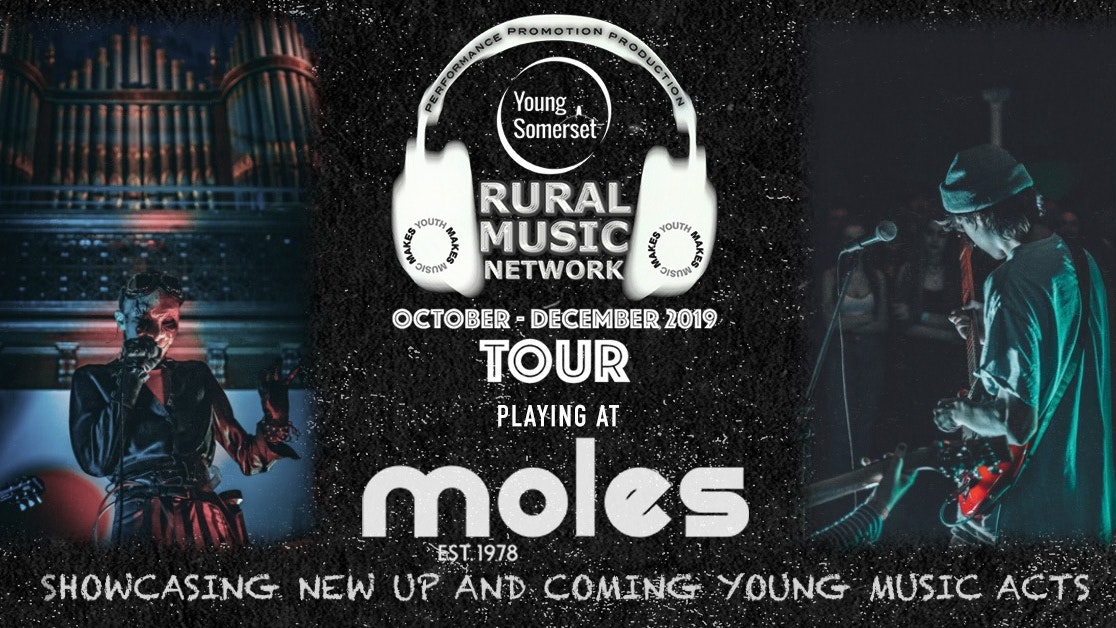 The Rural Music Network Project Tour, October – December 2019 is part of a music project ran by Young Somerset in partnership with the Cheese and Grain and funded by Youth Music. The aim is to bridge the gap between Young People and the music industry, increasing the promotion of up and coming young people’s music across Somerset. The Tour program showcases eight new music acts from across Somerset at eight different music venues.

The awesome music acts that are going on tour are:

Kizzie is a 20 year old singer-songwriter who has so far played solo sets around London. Kizzie has supported bands such as Tiny Ruins, Me and the Moon and China Bears as well as playing her own headline set at The Boileroom in Guildford.

Joshua Faulkner is a mixture of acoustic singer/songwriter songs, mixed in with some electric guitar and loop pedal pieces. Joshua has done several performances in and around the Glastonbury and Yeovil area. From gigs ranging from small pubs such as The Bull in Ilchester or the Hawthorns in Glastonbury, all of the way up to Strode Theatre in Street.

Elba comprise of four members who have been playing together as a band for just under a year. Since forming Elba have gone on to play two performances for Frome College Open Evening at the Merlin Theatre. Elba also had the chance earlier in the year to play at the Cheese and Grain as part of the Later with Frome College.

Junction 20 are a three piece band aged between 14 and 17 who started playing together in May this year. Junction 20 vary between genres such as rock, pop, punk and indie,  playing covers and some originals written by their singer/guitarist.

Cathy and Cissy are a newly formed duo who combine soulful vocals with dreamy laidback guitar sound to give a chill mellow sound to their music. Having previously played with Jazz bands expect these two to play originals and some covers.

Jessamy Bowditch is a young singer-songwriter from Somerset who has performed with various different local groups from a young age and has been creating and writing her own music for the past 8 years. The style of music Jessamy writes ranges from some upbeat ballads to gentle R&B but expect Jessamy to explore styles of music outside her comfort zone.