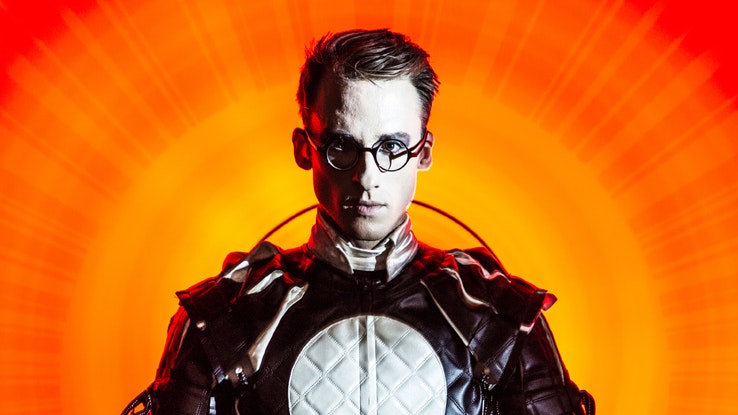 PLEASE NOTE: Due to unforeseen circumstances this event has been rescheduled to Saturday Dec 14th. Original Tickets still valid. Refunds available from point of purchase or email info@Moles.co.uk We apologise for any inconvenience caused!

“The Correspondents consist of a singer Mr Bruce and a producer Chucks. Both growing up in South London, they formed in 2007 and within two years had taken their hi-octane genre-blending dance music from house parties to festival main stages.

It’s hard to pin down exactly what they do. Mr Bruce dances in a tempestuous whirlwind of monochromatic energy while singing, rapping and scatting about the trails and tribulations of love, lust and everything in between. Chucks takes the crowd on a journey through genres from the retro sounds of the Swing Era to Blues and 60s Soul, and then out the other end into Electronica, Drum and Bass & Jungle. The Correspondents are never afraid to stick to their pop sensibilities, but get fidgety dwelling anywhere too long.

Since their inception they have toured far, wide and relentlessly bringing their unique live show to huge crowds, earning themselves Telegraphʼs ʻTop Ten Glastonbury Highlightsʼ two years in a row. The Times mentioned the band as ‘bundles of fun’ and the surprise success of Wilderness Festival 2017.

Following on from their more introspective 2014 album release ‘Puppet Loosely Strung’ the Correspondents come out with their 2nd long player, ‘Foolishman’ in 2017. It rediscovers their energetic multi-genred approach. Older, wiser, better looking and less inclined to take themselves seriously, the sound they create is increasingly sophisticated and designed for the dance floor.

Aside from the music itself The Correspondents have become renowned for their videos that are consistently unique in style and pioneering in technique. ‘Fear and Delight’, by visionary film-maker Naren Wilks, has had over 1.5 million views on youtube and won awards from the VMA and Berlin Music awards. Singer Mr Bruce has animated several music videos himself, with Well Measured Vice reached the front page of Reddit with its artistic virtuosity.

Their Who Knew EP released at the end of 2018 sticks to their multi-genre credentials and whole heartedly embraces a pop sensibility to pull the listener in four very different directions with candour and finesse.

Whether it’s an earnest up tempo love ballad reminiscent of the Cure (Who Knew), an explosive electro funk track about humanity’s high speed demise (Apocalypse) or a choral lilt on identity politics, consumerism and The Me Too movement (Only One Not Smiling) this EP shows the band at the apex of their capabilities. And there are some pretty inventive and surreal videos in the pipeline alongside them.”