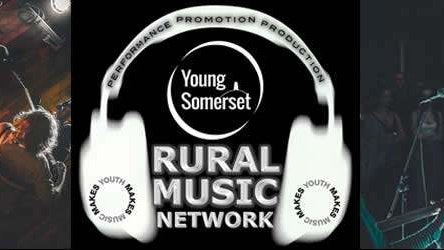 The Rural Music Network Project Tour, March – June 2019 is part of a music project ran by Young Somerset in partnership with the Cheese and Grain and funded by Youth Music. The aim is to bridge the gap between Young People and the music industry, increasing the promotion of up and coming young people’s music across Somerset. Tickets purchased on the door, this is an over 16’s event, any under 16’s must be accompanied by an adult.

The 8 awesome music acts that are going on tour are:

Marcus Smith a Vibrant and inspiring performer of lead rock/metal guitar, who plays to an eclectic mix (30 different tracks) of rock/metal backing tracks, such as Metallica, Iron Maiden, Guns ‘n’ Roses and Ozzy Osbourne, just to name a few!

Patchwork Poet a spoken word poet/rapper who has been playing for just over 2 years and has played between 15 and 20 shows, opening for metal bands, rock bands and open mic nights etc.

Otto Wilde a music alter ego who has been playing open mic nights in Bristol, Bath and Frome to hone his epic individualistic sound and original live set.

Otto Wilde has been greatly encouraged by the reactions of the crowds and the feedback he has received.  He has also been chosen by BBC Radio Somerset to sing live to help promote a busking competition in Frome.

Mischa Jardine Growing up in a musical household, music has been a part of her life since she was young. Mischa studied the cello and singing, both classically but was inspired by a lot of jazz. Not ever not knowing which one to take on, Mischa fused the two together in order to create a new sound. A new sound though it may be, it is also risky and difficult to convey. Cello can only do so much as can the voice, so some creativity is needed!

The FrontRunners are a four piece, lively, alternative/indie rock band that live in Frome. They have been playing for just over a year with their first performance being in the summer of 2017.

Since then they have performed at the Cheese and Grain, the Frome festival, along with various pubs and clubs around Frome and most recently the Fleece in Bristol. They have around 9-10 original songs plus play some covers.

Elliot Garcia has been playing acoustic guitar for almost 7 years and incorporate a loop pedal into his performances and song writing. He produces a lot of his own music and has remixed a lot of other artists songs. Elliot performs on a regular basis, in school productions & concerts and has also busked around London. To see more visit: https://www.facebook.com/ElliotGarciaMusic/

SWINGRAY Came together as a project in our mutual appreciation of neo-soul and jazz/R&B music. In doing so, we decided to start off by covering Hiatus Kaiyote and Thundercat, and take inspiration from their rhythmically complex and melodically creative music. We have performed at the Bell Inn pub as well as the Nest live music venue in Bath and have another upcoming gig at the Nest on the 16th February. We plan to expand on our performance venues and are in the process of booking gigs in Bristol as well. In the meanwhile, we have three originals in progress that are due to be completed in the coming weeks.

The Marianas ‘The Marianas’ and are a 5-piece Indie Rock/Pop band based in the City of Bath, UK. Their line-up consists of Chloe Richards (Vocals), Sam Allen (Guitar), Theo West (Keys, synthesisers), Liam Campbell (Bass Guitar) and Jack Morgan (Percussion).

You’ll see them blending bold, original synths with smooth and bubbly guitar tones. We tend to parallel characteristics of 80s Dance with some arena rock elements being channelled on the side. This is made noticeable by our prominent, punchy rhythms and intelligent use of syncopation (which lies as the backbone to many of our tracks).